Live birds arrive at the slaughterhouse in plastic cages stacked in columns of eight. Once unloaded from the lorry, the cages are placed on a special conveyor that takes them automatically to a de-stacker.
At this point, the cages proceed one by one to the suspension area, and once emptied continue their journey to the automatic washer.

The cage-washing cycle is carried out in three stages:

Once this operation is complete, the cages are sent to the stacking machine and restacked in columns of eight, ready for re-use.

Suspended from the shackle line by both feet, live birds reach the electric stunner, which is in an isolated area for safety reasons. Stunning is carried out in a special tub connected to a control panel for varying/regulating electrical voltage and frequency.

Stunned birds reach the automatic neck cutter, which makes a lateral incision with a circular blade at the base of the head. This operation is supervised by staff who manually intervene in the evet of a bird avoiding the neck cutter.

Once the incision has been made, the birds continue to the bleeding area in which 90-95% of the blood is collected in a special tub, and then stored separately to prevent it being poured into the drainage system.

After passing through the bleeding area, the birds are soaked in the scald/shrink tank. This procedure loosens the follicles, making the plucking process easier.

Tank water temperature is electronically controlled so as to keep it within a margin of 0.2°C above or below the preset temperature, normally between 51° and 52°C. 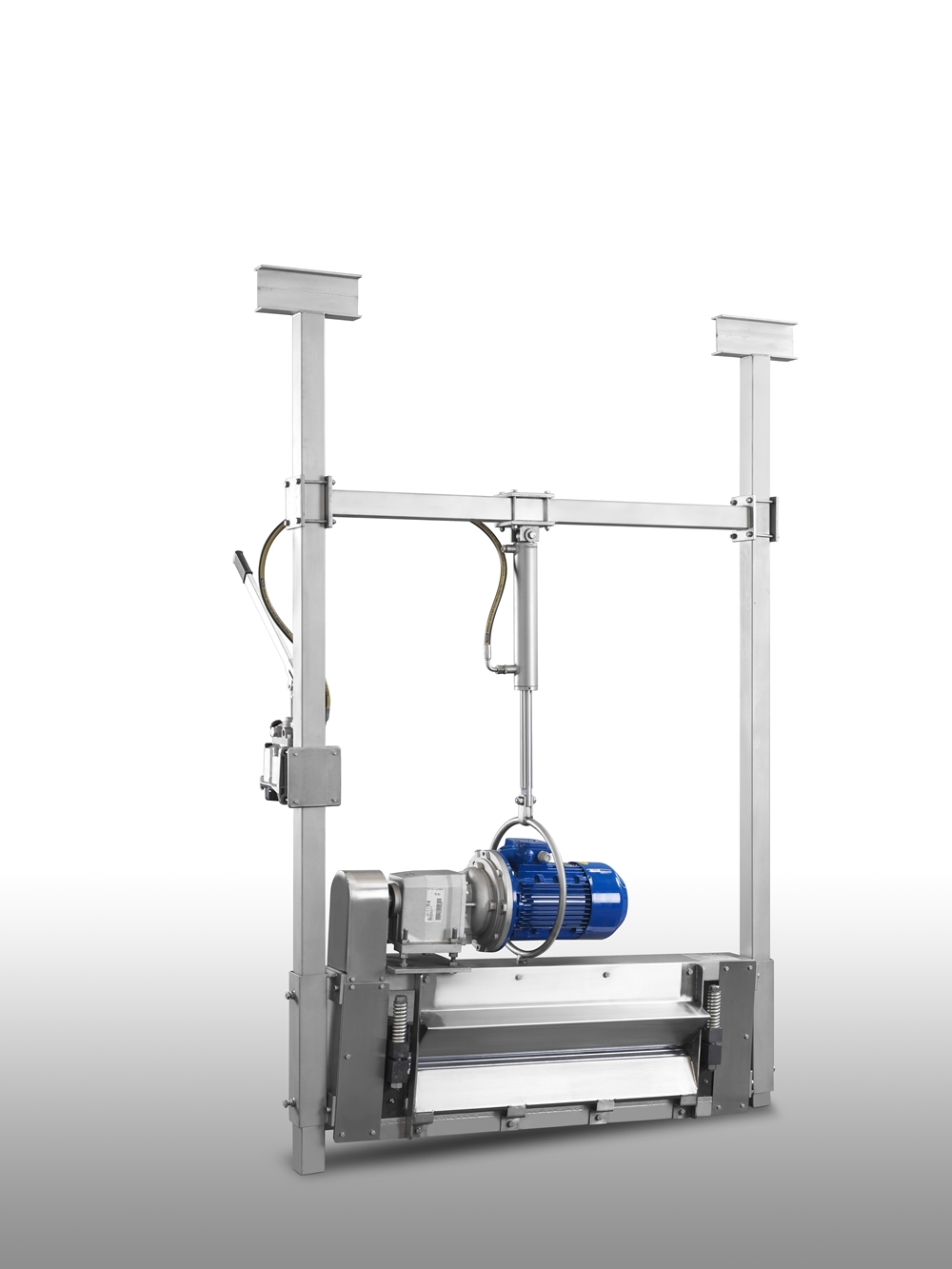 The plucked birds are now ready for evisceration – this can either be done manually (for traditional presentation with head and feet still on), or automatically for the “oven-ready” product.

Birds arriving from the plucking machines are inspected by an operator, who picks those suitable for traditional preparation and diverts them to a dedicated line clearer. Birds not selected continue towards the automatic processing line.

Traditional preparation takes place on a separate line, which entails the birds being re-suspended and then cut open and eviscerated manually. At the end of the line, the birds are suspended in baskets in the chilling tunnel. The innards are collected in a tub, and then transferred to storage tanks via a vacuum system.

Birds destined for automatic processing arrive at a special blade device, where the feet are removed. They are then re-suspended on the automatic evisceration line, which entails the following operations carried out in sequence:

Once these operations are complete, birds cleared from the line onto a conveyor are trussed and re-suspended in baskets for transfer to the chiller tunnel.

The birds then enter the first section of tunnel, where they undergo a process crucial to preserving the meat: drying.

Here a new system has been adopted that replaces traditional hot and cold elements with a humidity absorption system, using hygroscopic technology that as well as performing a drying function also has a bacteriostatic effect on the recycled air (this system is described in more detail in a separate section).

Having passed through the drying area, the birds move onwards into the chilling area – here they undergo the cooling process that is essential for preserving the finished product.

The tunnel is separated into two zones for two separate stages of cooling, so that the product reaches the desired temperature with weight loss limited to between 1 and 1.5%.

Various separated, de-fatted and cleaned products from the giblets processing stage of evisceration, once drained and chilled, can now be packed in the appropriate tubs after quality grading.